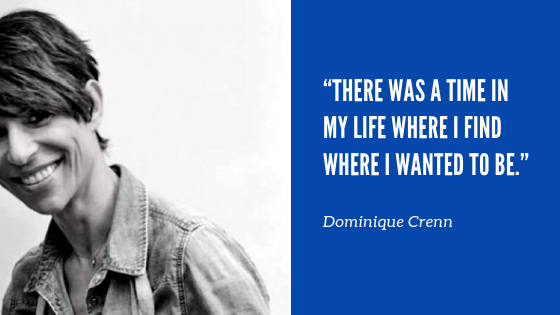 When I knew that Dominique Crenn became the first female chef in The State to earned her third Michelin Star, it drove me to revisit an episode from Chef Table that features her life story.

The 50-minute show went on like a breeze that made me feel, ponder and tear. When the screen darkened and the producer’s name appeared, I was left longing for more to stay in her story.

Chef Table perfectly marries all masters of craft in a single breathtaking production.

“There was a time in my life where I find where I wanted to be.”

Dominique started working in Star Restaurant without any culinary training. In her first job, her passion for the profession budded when she was empowered to create dishes without a recipe.

When she explored different countries and restaurants later, Dominique realized that she wasn’t happy doing what she did. She wanted to do something for herself. Knowing that she had absolutely nothing to lose, she opened Atelier Crenn and settled down in San Francisco.

I found comfort from her journey knowing that it’s okay to spend time finding my place in the world.

This line struck a chord deep inside me because it sounded like an answer I needed to hear at that moment.

As a self-taught writer who stumbled upon the creative industry by chance, I spent the past one and a half year figuring out where I fit in the industry. There are many things that I can do, but not many things fulfil the part of me that craves for creative freedom.

When Domonique said, “Atelier means a workshop, a place where you create, you use your brain to think”, I smiled and rejoiced in her beautiful words.

“It is not just a restaurant, it is my house. If you come to my house, allow me to talk to you.”

Atelier Crenn is known for presenting their menu in a poem, where each line represents a dish and the emotion that the dish delivers.

“I open Ateliar Crenn because I want to tell a story. It’s not about creating dishes, it’s about us connecting everything from the start to the finish.”

The creation in Atelier Crenn represents a grand endeavour we do as a human being to create meaning, beauty and connect with one another.

When the storyteller reaches deep inside herself, pull an emotion out with honesty, vulnerability, and share it with people, it creates a ripple effect that changes the world one dish at a time.

“I just realized that my mum went to the hospital and I didn’t know about it.”

Dominique and her brother were adopted by a politician and artist who raised them like the most precious gifts in the world.

She was on the other side of the world when her father passed away. When her mother thought that she was too busy with work and didn’t want to bother her, it hit her hard.

“Every child think that their parents are invincible… And then it hit me, mortality… I want to be present in my parent’s struggle.”

I looked back and realised just how blessed I am to have my parents by my side on my journey.

“I know it is hard, life is not easy, but always believe in yourself and who you are.” — Dominique’s late father

Dominique’s life, in a way, is full of love and freedom.

The richness of her life empowers her to turn her story into a journey of sensory exploration, to let people have a taste of what it’s like to live fully.

It’s okay to spend time finding where we belong in this world because that journey itself will ultimately become our masterpiece.

A full life doesn’t equate a good life. It is one that encompasses all seasons, receiving regrets, longing and all emotions with grace.

At the end of the show, I stood firmer knowing that I have the most precious ingredient to create the masterpiece of my own — love.