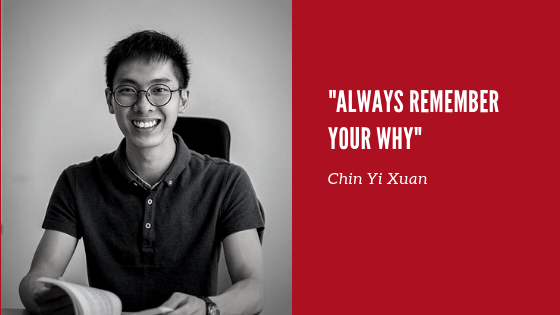 I connected with Yi Xuan on social media before we met in an event. When I invited him to participate in a magazine sharing session as a curated sharer, he gracefully accepted and brought us a heartfelt story about quarter-life crisis.

It took a lot of courage to share his struggles as a millennial who chose an unconventional career path and stumbled his way forward.

He is such a beautiful, real human being, I thought at the back of my mind.

The pursuit of ‘fulfilment’

Yi Xuan had a good head start in his career when he joined a startup company as a business development executive that paid him easily 20–30% more than his peers.

However, after only 3 months, he quit the well-paid job because of the emptiness in his heart. When I asked him to explain ‘fulfilment’, Yi Xuan said that many of his friends didn’t like their job but they felt obliged to fulfil the rules set by the society — to get a job, buy a car, and own a property.

After leaving his job, Yi Xuan started doing things that he was genuinely interested in — blogging and learning to trade.

From the hindsight, Yi Xuan summed up his journey thus far as a humble experience of making mistake and learning along the way. Like most millennials, he overestimated his ability and underestimated the learning curve, time and money involved to master a skill.

He thought trading was easy but he lost all his capital before he learned to make better decisions. He thought he can build a website but it took him one year of tweaking to have the version that met his expectation.

He did have the ability to become good in trading, writing and building a website, it just took much more effort and time than he thought.

I found it interesting when Yi Xuan mentioned that having a big ego in trading affected his trade decision. In the game of probability, when Yi Xuan made his move against the market and no one else, his emotion and reaction over an outcome of the trade fully reflected his own ego. His ego hurt badly in the beginning when he took loses personally and doubted himself.

Over time, Yi Xuan learned to acknowledge his ego, accept mistakes and losses as part of the learning process and not to take them to heart. Being able to assess mistakes objectively and moving pass them eventually enabled him to make better trading decisions.

On the lonely journey of showing up every day for what he believes in, Yi Xuan admitted that he experienced seasons of downtime almost every month. He developed a set of morning and night routine that he followed religiously in order to stay motivated and aligned to his mission.

Yi Xuan starts the day with Vipassana meditation, practices self-affirmation where he visualises the person he wants to be and writes down the things he is grateful for. He always ends the day with meditation and reflection journaling.

No matter what happens during the day, his routines ensure that he starts the day and finish it with a healthy mindset and strong will.

One year after blazing a path on his own, Yi Xuan learned to be more patient in realizing his aspiration compared to the time when he just graduated. He sees life as a marathon where he needs to have enough rest in between and pace himself properly in order to finish the run.

Instead of dashing for a quick win, he gives himself the room to make mistake, be patient, disciplined and consistent in every step he takes.

Even though there were times when he longed for a comfortable life that his friends are living, he always brought himself back to his ‘why’ and stay grounded in the purpose that gives meaning to life.

Yi Xuan writes to inspire millennials to live a meaningful adulthood life and know that they are not alone in their journey. In his words, if he could light up a person’s day even just for a moment, he has achieved what he set out to do.

Moving forward, he will focus on providing affordable personal investment course for young adults to empower them to take adulthood heads on.

It is not an easy choice to go it alone, but Yi Xuan reminded me that it’s important to always remember our ‘why’ and let that guide us where we should be.