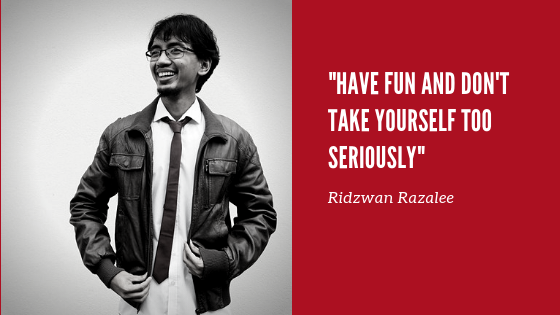 While Ridzwan and I got acquainted through a mutual friend, we got to really know each other through our work.

I realized that there were a lot of parallels in our journey from an overseas graduate in the professional industry to finding our place as a creative misfit.

I found my path as a writer, content creator, community builder, Ridzwan found his place in writing and film making.

1| Stay true to who you are

Ridzwan always knew that he wanted to do creative work since he was young. However, he chose to study law in order to attempt something difficult. He didn’t realise that creative work felt easy to him because he was, in a way, ‘built’ for creative work.

After graduation, while it sounded perfect that Ridzwan got a corporate job in a media company, he went through the longest year in his life and hated what he did every day.

It took time to learn that when he makes progress doing what he enjoys doing, its the sign that he is on the right path.

2| Overcoming challenge in the creative industry

After the first corporate job, Ridzwan took a leap of faith to start his creative journey as a copywriter and discovered his inner calling to produce films.

Going through the emotional roller coaster on this journey, journaling became his tool to gather thoughts, process them, reflect upon them and build his internal fortitude.

Ridzwan found that surrounding himself with ‘crazy’ people in the right environment motivated him to stay on the path. From his experience, the environment he was in had a direct impact on his quality of work.

3| The fear of not getting his sh*t together

In the first year after college, life didn’t turn out the way Ridzwan expected. Besides feeling stuck in a job that he hated and being affected by health issue, he hated himself for not having his shit together.

Looking back, he realized that it’s okay to not have his shit together and keep making progress. It is more important to appreciate the process of getting where he is and be excited about what he could achieve if he keeps learning.

Interestingly, Ridzwan felt that failure defines him and boosts his confidence while success leads to the fear of not living up to a certain standard. It is in failure that he grows the most and identifies people who will root for him.

The best things that Ridzwan has done for himself are learning new things and getting himself out of the rut whenever he feels stuck. Despite having a degree in law, he took up a 3-months babysitting gig in Switzerland when he was in the void of figuring out life. He sees this break as an investment for the lessons learned and a new perspective shift in a new country.

When he embarked on the creative industry, it took him a long time to acknowledge that he has the ability to level up his skills along the way and not see the lack of technical expertise as a hindrance. In Ridzwan’s word, it is okay to look like a fool when anyone starts anything new.

5| Advice for younger self

In the benefit of hindsight, Ridzwan would advise his younger self not to worry about pleasing people. He used to pressure himself about making ‘x’ amount of short film and writing ‘x’ number of articles, but now, he gets a lot more done when he is at ease with himself.

To start a new career without any credential, he learned the importance of having mentors and seeking knowledge from online contents. The book ‘Mastery’ opened Ridzwan’s mind that he didn’t really need a ‘yoda’ to guide him in life. The action of doing the work itself can be a form of mentorship that propels him forward.

At this point, Ridzwan’s guiding principle in life is to have fun doing what he enjoys. When he is aware of what ‘fun’ means to him, he stopped being apologetic to turn down things that didn’t bring him joy.

Even though Ridzwan is not sure about the kind of impact he would create, he believes that he will find it as long as he keeps doing the work that inspires him.

Life is not about control, it is to stay open to challenges, to what is possible, and make the most out of every moment.