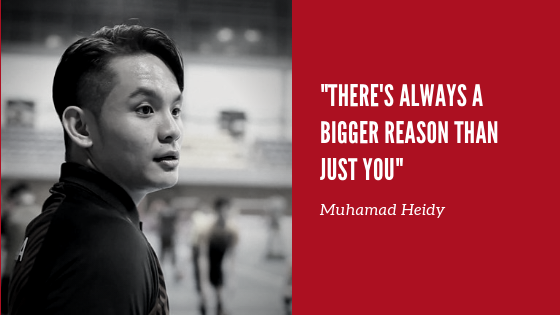 It was hard to believe it when Heidy, the coach and captain of Malaysia dodgeball team, told me that he used to be a chubby kid who was bullied at school.

Some kids could have resorted to drugs and negative demeanour, but he found sports. Maybe, it is also this experience that taught him to stay grounded and appreciate the opportunities he was given in life.

As the person who has contributed tremendously in taking the Malaysia dodgeball team from nothing to world class level, it was a chance encounter that got Heidy into the sports and the adrenaline that got Heidy hooked to playing it.

Then, the team started to join regional competitions and ‘accidentally’ qualified themselves for the world cup in 2016. It didn’t matter that Heidy and his team had no clue how the other teams played at the world level, they just trained to play the best they could.

Long story short, they appeared as the favourite underdog and won second place in their world cup debut. It was better that way, Heidy said, because that gave them a goal to strive towards.

After winning the world cup in 2016, everything changed back home. Their impressive results garnered attention and people wanted to be part of that, be it sponsorship, partnership or joining the sports.

Leading a team of semi-pro players where everyone trained after their full-time job, Heidy kept everyone grounded by reminding them that they played for the flag on their chest, not for fame.

He also made sure the team knew that they are not good enough and they will keep striving towards the top of the world, literally.

Heidy mentioned 3 points when I asked him what advice would he give to the next captain. First, it is important to have a team purpose, in Heidy’s case, to play for the country. In his words, we don’t need a star player, we need a person that has the heart for the country.

The second is to lead by example and put the team before his personal interest. Lastly, it is to have a bigger reason than just him. Heidy hoped by leading the team, he could have a positive impact in the lives he touches.

4| Lessons learned from a major loss

In the world cup 2018, Malaysia lost its favour as the underdog and braced the challenges with a bumpy start. While the team lost the first game, they played their way up and met England, the defending world champion for 10 years in the semi-final. They played an excellent game to beat the all-time favourite and yet, in the grand finale, they fell short to Austria.

Despite beating the 10-years champion and defending their place at world number 2, Heidy was devastated for the loss. Looking back, he said that it was all about expectation.

A result is just a result, whether we fall into victim mode or celebrate it, it is our own perspective that gives it values.

Coming from a multi-ethnic and separated family, it had been hard for Heidy to gain attention at home. When he went to primary school, he was a chubby kid who couldn’t speak a word of mandarin and the only boy who wore long pants. The differences made him an easy target for bullying.

People’s perception of him started to change after Heidy excelled in sports, slimmed down and won competitions. Nevertheless, that chubby and lonely boy will always stay in his heart, reminding him that the fame and achievement do not last. The people who were there before he had something are the real friends worth keeping.

Change the world through sports

There is no doubt that sports and training changed the course of Heidy’s life and paved the path towards his new venture in the self-development and coaching industry.

Through corporate training and coaching young people in sports, Heidy aspires to empower more people to believe in themselves and create a fulfilling life in their own way.

He believes that hard work beats talent because the situation he was in had moulded him into a leader he is today, finding joy in life through giving.

“The love in your heart isn’t put there to stay. For love isn’t love until you give it away.” Unknown