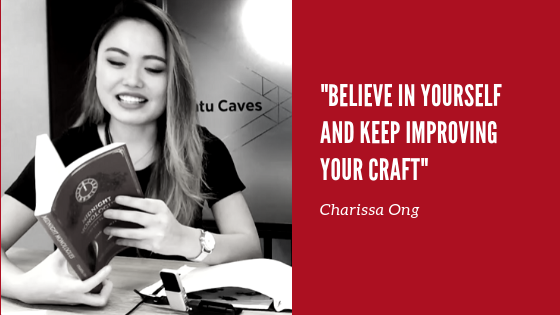 I’ve heard a lot about Charissa before meeting her in person. Crowned with the title of a national best-selling author, she has a care-free spirit in spite of serious dedication for her craft.

From our conversation, I am mesmerized by how much Charissa believes in herself before people in the publishing believe in her, and how she hustled her way to get her first book out in the market.

When it comes to writing, she doesn’t leave anything to chance.

1| Motivation and drive to write

During that time, Charissa’s unfulfilling career as a designer in an ads agency also motivated her to write more. Writing gave her an escape from energy-drenching work as well as something tangible to feel good about herself.

2| The unconventional path to publish her first book

When it comes to writing, Charissa constantly analysed the writing style of other prominent poets and measured her work against the best in the genre. When she felt ready to publish her book, everything that she could find online about book publishing diminished her hopes.

Undeterred by the unresponsiveness and rejection from all the publishers she approached, she shot an email to the public support service of a major bookstore.

Long story short, they replied to her email, she went for a pitch, they accepted her proposal and she founded a publishing company to make it happen.

I really admire Charissa’s determination to bypass the gatekeeper who said ‘no’ to her.

As a writer who creates based on her own personal story, Charissa takes a big risk that exposes her vulnerability. While she took hurtful comments to heart in the beginning, Charissa learned her lessons to develop ‘thick skin’ and focus on constructive feedback that helped her grow.

In her words, ‘think whatever they want to think, I’ll let the creative juices flow.’

Even though she is a best-selling author with 2 books that top the list, Charissa admitted that sometimes, she couldn’t escape the fear of being a ‘2 hit wonder’.

To counter this, she consciously set a bigger writing challenge and keep honing her craft, believing that something great will come eventually even though not everything she creates is a masterpiece.

I have met many aspiring authors who have a story in them but keep procrastinating to turn their story into a book, fearing that ‘they can’t write’.

Charissa’s biggest tip for them is to have more ego and believe in themselves. As a self-taught writer, she highly recommends everyone to read a lot because it took her 2 years of reading and preparation before she felt confident enough to start writing.

To build creative confidence, it's also important to show their work to a trusted group of friends and get feedback in a safe environment.

5| Be a valuable hybrid in career

In term of career, the most valuable advice Charissa received is to take up work experiences or internship while studying in order to form a better idea about how the ‘real world’ is like.

As a writer with training in design, she also encourages young people to venture out of their field and master a different craft to become a valuable ‘hybrid’ in an organisation. In her own case, being able to write and design empowered her to have full control in the aesthetic aspect of her book.

When she started a company to publish her own book, she had to diversify even more to learn about different components of a business, such as sales, marketing, and PR.

One of the things that Charissa is most proud of is that her work encourages some young readers to start picking up books.

Charissa believes that books can create a more tolerant society where we are able to understand each other better through words. With a publishing company at her back, she aspires to empower more talented writers by publishing their work.

Ultimately, through her work and the company, she hopes to realise a massive dream of improving the literacy rate and education in Malaysia, putting our country on the literary world map.