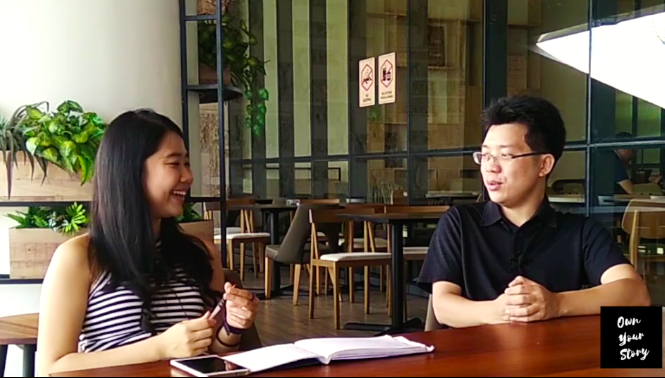 I met Paul during my book launch event and learned about his educational podcast channel for creatives called Plusma-cast. Fast forward a year, it was an honour when he invited me to interview him in conjunction with the first-year milestone of his channel.

Paul started a podcast while he was going through a low point in life after quitting the architecture industry. When he looked around and referred to his role models, he figured that his challenges were not unique.

“How might I change the situation so that it is something that I can work towards and help other people?” This is the turning point for him to pick himself up and start Plusma-cast.

Plusma-cast focuses on creative professionals to highlight their journey to turn an idea into skills and vocation.

Paul observed that beyond acquiring the skillsets in the creative industry, be it art, design, writing or culinary, many creatives lack the support and know-how to establish a sustainable vocation.

Through the channel, Paul hopes to empower creatives to build a sustainable career and learn to define their own success as a creative professional.

In the journey of running a podcast channel as a one-man team, Paul’s biggest obstacle was his self-doubt and fear of putting himself out there.

In order to get out of his head, Paul would tell himself that nothing is going to happen if he stays home and succumbs to fear. The notion of ‘just do it’ translate into ‘what can I do to make things happen’, which drove Paul to get out to meet people, chasing events and building his network.

When it comes to getting creative professionals to be his podcast guest, Paul highlighted that personal connection is an important factor to build trust instead of just sending emails. On top of that, having a big meaningful purpose is also something that draws people to come onboard.

To get the best wisdom out of a person, it is important to let them talk, be open-minded, and create a safe space to share stories. Most guests are open to share their personal story knowing that it could inspire the wider audience.

One of the most memorable lessons that Paul learned from the guests was when a self-published author, Richard, shared with Paul about the commonalities in value creation in work. The difference between a person who works in a 9–5 job and a person who becomes an entrepreneur is that one presells values while the other establishes value.

Another important insight comes from a musician who said that there is no such thing as genius. People who are high in the creative hierarchy simply found the match between their skill and life work much earlier in life.

5|Where does creativity come from

After multiple conversations with creative professionals, Paul said that there is no sure way to unlock creativity. It could be mentoring, overcoming a personal challenge, taking deliberate action, or triggered by some major life events.

One thing that is common among all creative professionals, though, is that they never give up on their passion and their ‘why’, even though some started their pursuit much later in life.

Be the light for others in their creative journey

Moving from the architecture industry to media, Paul’s guiding principle hasn’t changed — to help as many people as he can through his craft.

Through Plusma-cast, his goal is to produce contents that are useful to help young and aspiring creatives to develop their skills and build themselves up in the industry, to stay on the journey when things get hard.

Paul believes that it doesn’t matter when a person starts or how long it takes to reach the destination, the most important thing is to stay in the journey, practice the craft and never lose faith.