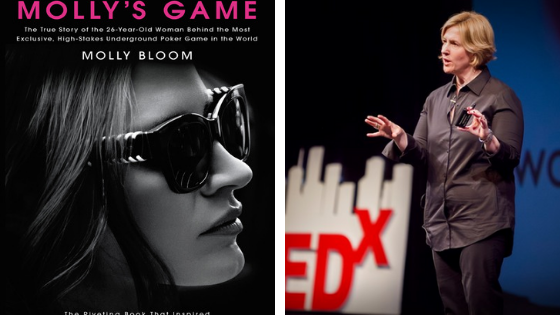 From a movie based on the life of a 20 something female who built the most exclusive high-stakes, an underground poker game in the world and a book written by a shame researcher on her life work, I learned a common life lesson in these 2 vastly different sources — the power of owning our story.

In her book ‘Daring Greatly’, Brene Brown said that we get to write the ending when we own our story.

At the rock bottom of life, Molly Bloom convinced the best screenwriter in Hollywood to turn her life story into a movie, ‘Molly’s Game’. In 4 years, she marched from the federal court onto the Oscar red carpet.

Portrayed by Jessica Chastain, I was hooked by the story of Molly Bloom after watching ‘Molly’s Game’. At 20, her dream to qualify as an Olympics skier shattered in a horrifying accident. She took a gap year in Los Angeles and stumbled upon exclusive high-stakes poker games played by some of the most influential people in the world — A-list actors, Wall Street titans, sports stars and politicians.

She single-handedly built her own game in Hollywood. After a fall-out with an A-list star who controlled the game, she started a new, bigger game from scratch in New York and made sure that she was ‘non-fireable’ this time. Everything fell apart when the FBI found out that several high profile financial crimes were linked by a common thread — Molly’s poker game.

In the movie, Molly was portrayed as a heroic female character who built her multimillion-dollar business around the most powerful men in the world. The narratives focus on her courage, conscientiousness and integrity despite making many bad decisions along the way.

When the FBI offered to give her back millions worth of assets and put immunity on the table in exchange for her clients' information, she never gave in.

She said, her clients trusted her and she profited significantly from it, it was wrong to save herself by betraying that trust and revealing information that could ruin families and lives. She chose to own her bad decisions and pleaded guilty even though it could cost her up to 10 years of jail time.

Luck was on Molly’s side — the judge sentenced her to community services, probation and fines.

The movie ended after the sentence, where Molly was 35, a convicted felon in millions of debts, not knowing what to do with life.

In real life, she figured that her story was an asset she could capitalize on and hustled her way to meet the best scriptwriter in Hollywood, Aaron Sorkin. In their first meeting, Aaron told Molly that she was ‘so down to her luck and so full of herself’. He also made the decision to start working on the script immediately, where the screenplay eventually became his directing debut.

In an interview, Molly said that after going through several dramatic cycles of up and down, she learned that no matter what happens, ‘it’s going to be okay’.

Daring greatly in the arena

When I saw Molly Bloom on the screen, it was hard to imagine the storms she had steered through and yet there she was, telling her story with compassion and making an impact in people’s lives.

It brought me back to Brene Brown’s work, where she said that shame is different from guilt; what you do is not who you are. If a person does something bad, he can still be a good person who makes a bad decision.

Molly Bloom is a person who lives wholeheartedly because she never attached her self-worth to her action and chose to live in her story, acknowledging the cracks and imperfections that shaped who she is.

Daring greatly is not about winning or losing. It’s about courage. In a world where scarcity and shame dominate and feeling afraid has become second nature, Molly Bloom engages the world in a way that inspires me to be a little bit braver in creating my own story.

That’s the best thing we can do for one another — owning our story and shining a light on people in darkness.

“It is not the critic who counts; not the man who points out how the strong man stumbles, or where the doer of deeds could have done them better. The credit belongs to the man who is actually in the arena, whose face is marred by dust and sweat and blood… and who at the worst, if he fails, at least fails while daring greatly, so that his place shall never be with those cold and timid souls who neither know victory nor defeat.” ― Theodore Roosevelt