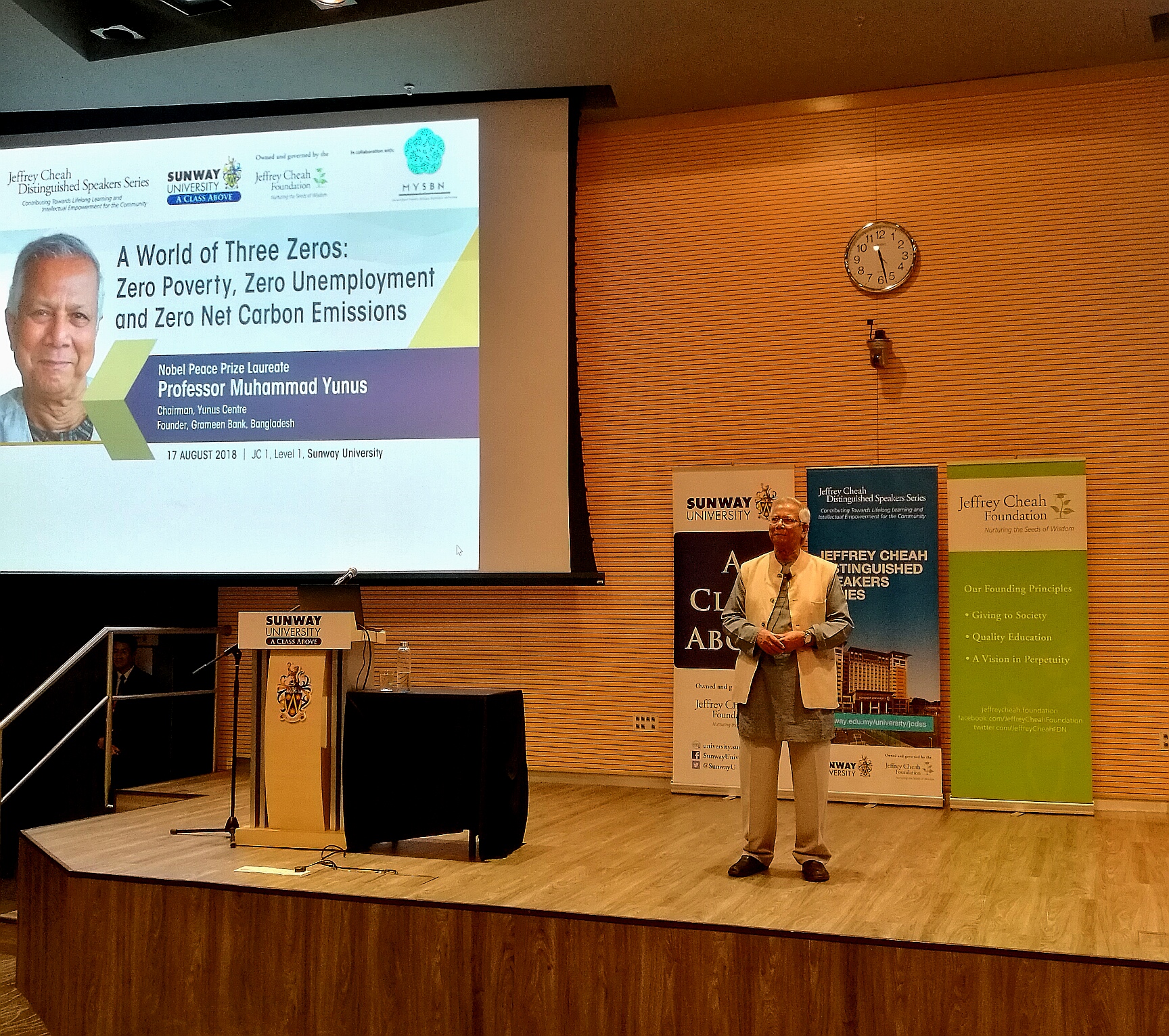 “Making money is no fun. Contributing to and changing the world is a lot more fun.” ― Muhammad Yunus

Maybe it’s the Nobel-Laureate effect, Professor Yunus’ guest lecture at Sunway University was one of the most intriguing lectures I’ve ever attended.

To start with, the eager student on my left was a retired consultant in his 60s. It was quite breathtaking to have a lecture hall filled with people from all walks of lives across different generations.

When a respectable thinker whose lifework aims to break through the system and institution delivered a lecture in a leading institution, it made me laugh.

1| Going back to the human nature

Professor Yunus started the lecture talking about how capitalism operates based on the flawed assumption of human’s self-interest, leading to wealth concentration and poverty.

He said that poverty is a system failure where poor people are like ‘bonsai’ that is not given the opportunity and space to grow.

So, he created a social business model to harnesses the natural entrepreneurial spirit of human being, empowering poor people to start small businesses and get out of poverty.

Seeing professor on the stage, I was fascinated by his enormous spirit that translates a once-impossible mission into reality and won awards all over the world.

The hall burst with laughter when Professor Yunus said that the problem of unemployment is created out of the existence of ‘employment’.

He said, most education institutions pride themselves for producing students who are job-ready instead of life-ready.

By getting a job, young people find themselves in a box that takes away the amazing creativity of a human being, developing a microscopic view of life and achievement.

This is far from being life-ready that encompasses grit, resilience, and problem solving, stopping young people from having a bigger world view and ask, what can I do to solve important problem?

I was enthralled when Professor Yunus advised all young people to ‘be yourself’.

In the world today, productivity seems to be an obsolete metrics to measure a person’s output when the machines can learn better and faster.

Professor Yunus told a story about an educated young man who had no clue how to start a business when being advised to do so.

It didn’t make sense, said professor, because his parents who were uneducated had used their common sense to get loan, make a living, and give the children an education to change their lives.

To steer the future in the right direction, young people need to develop a unique perspective free from conditionings and worldly knowledge, do what they are best at, and collaborate to make progress.

There is no problem that can’t be solved

Professor Yunus ended the lecture calling out to young generation to solve global issues such as poverty, unemployment, and carbon emission.

He said there is no problem that human being cannot solve; we have expanded the possibilities by sending men to the moon and inventing machines that can fly.

The simple thing we can do is to talk about it more, raise more awareness about the core issues, and inspire more people to tackle the pressing problems.

The lecture wasn’t all facts and stats, Professor Yunus’ empowered and inspired us to make a choice for ourselves with his compelling stories.

Hi, I am Isabelle, author of ‘The Art of Owning Your Story’, I write about conscious living and personal growth, building a podcast called ‘Own Your Story’. If you enjoy what you read, subscribe to get the latest contents delivered to your inbox! Thank you 🙂